India is home to a wide range of flora and fauna that spreads across from Kerala to Kashmir and from Gujarat to Assam. Ashy Prinia is one of the most common birds in India.

Here in this post, I am sharing some details about Ashy Prinia. Its identification, distribution and behaviours.

These 13–14 cm long warblers have short rounded wings and longish graduated cream tail tipped with black subterminal spots.
The tail is usually held upright and the strong legs are used for clambering about and hopping on the ground. They have a short black bill.
The Ashy Prinia crown is grey and the underparts are rufous in most plumages. Inbreeding plumage, adults of the northern population are ash grey above, with a black crown and cheek with no supercilium and coppery brown wings.
In the non-breeding season, this population has a short and narrow white supercilium and the tail is longer 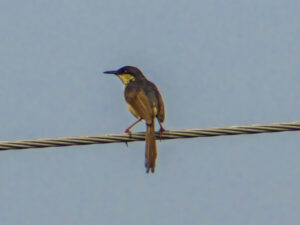 The Ashy Prinia or ashy wren-warbler is a small warbler that belongs to family Cisticolidae. This Prinia is a resident breeder in the Indian Subcontinent, ranging across most of India, Nepal, Bangladesh, Bhutan, Sri Lanka and western Myanmar.

Scientific name: Prinia socialis
Conservation status: Least Concern (Population stable)
Rank: Species
Higher classification: Prinia
Family: Cisticolidae
@wikipedia
It is a most commonly seen bird in urban gardens and farmland in many parts of India and its small size, distinctive colours and upright tail make it easy to identify. The northern populations have a rufous rump and back and have a distinct breeding and non-breeding plumage while other populations lack such variation
Here is a small video of its behaviour:
Like most warblers, the Ashy Prinia is insectivorous. The song is a repetitive tchup, tchup, tchup or zeet-zeet-zeet. Another call is a nasal tee-tee-tee. It also makes a sound like “electric sparks” during its fluttery flight, which is thought to be produced by the wings. Watch below video to hear its chirping sound.
Reference:
@wikipedia 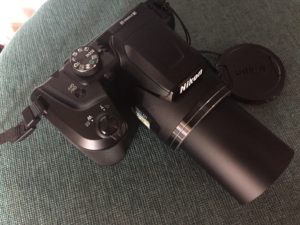 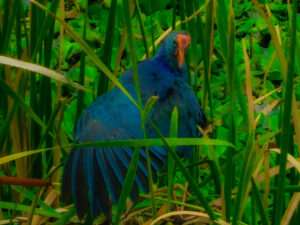